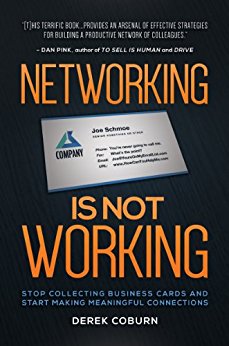 There was a time when networking was a big deal and pretty much all anyone could talk about. But over the years, networking has evolved into something else and now many people wonder if it’s still worth the trouble.

Derek Coburn tackles this issue in his book, Networking Is Not Working: Stop Collecting Business Cards and Start Making Meaningful Connections. Coburn focuses on building relationships instead of the superficial networking that reigned supreme in years gone by. The concept is simple but that doesn’t mean his methods are easy.

Simply put, Coburn suggests that you forgo speed-dating style networking events and instead focus on quality over quantity when it comes to business relationships. It’s sound advice, but it isn’t always easy to apply in every situation or industry. Business owners focused on e-commerce, for example, may not be able to apply these methods since the way they interact with other professionals is so different from the examples used in the book.

Derek Coburn’s book is essentially the story of how he built his own network. The methods he suggests, however, only really have the backing of his personal anecdotes, making it hard to translate for people in different types of business. While much of what he has to offer is worthwhile, this simply doesn’t provide enough variance to make it worthwhile for every business owner.